Processing Emotions: The Mayan Way, and with Light 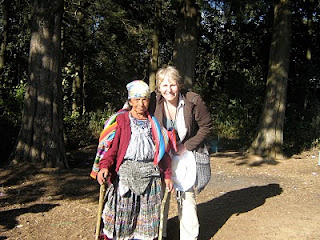 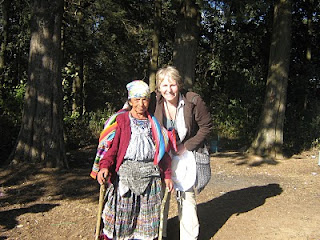 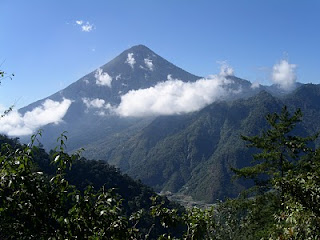 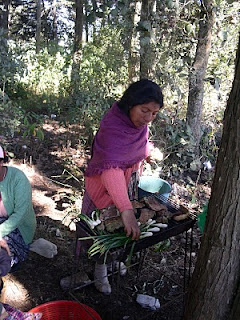 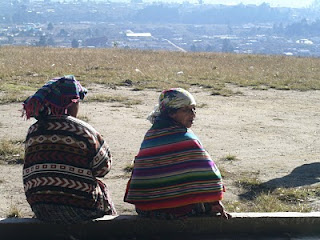 2010 - New Year's Eve was spent in a hotel room in Guatemala City, hoping to catch a standby ride on a plane to Miami early the next morning - thanks to my brother's job as a captain with American Airlines. Smelling the acrid smell of thousands of fireworks, but unable to see out of the fortress hotel, I reflected on the new awareness that travel brings to our daily lives, and how we are all connected in our guardianship of our planet. Leaving behind the busyness of the past few months with Light for Health, I went to Guatemala with my son, to revisit his time there as a volunteer in the indigenous Highland area of Quetzaltenango, or Xela, as it is popularly known.

Staying with the founder of INEPAS, the organisation he worked for, we spent Christmas Day leaving the city for the surrounding rural area, visiting a 19 year old girl whose last five years of education had been sponsored by Dario, a visiting Italian, who was also staying with us. Bumping along the dirt road, we passed many fields, houses and shacks in the wide open valley encircled by mountains. Every patch that could be cultivated was. Ingrid lived with her mother in one small room in a compound with other family members, and a room that housed the communal loom. She greeted Dario with a specially woven cloth with his name and the date, to thank him for his generous sponsorship enabling her to progress to become a bi-lingual (English) secretary. Then we were informed that the whole extended family, waiting outside all standing in an openbacked van, were taking us for a picnic to celebrate our visit. Christmas Day was their only day off.

Climbing higher to a wood overlooking the valley, we decamped near a large cross and an open patch of ground. Out of about fifteen people, including young children, the family only comprised two men. The rest, we were informed, were probably in the USA having gone there to find work.
A barbeque was set up and meat, probably lamb, was put over the charcoal, but not before we all joined hands in a circle and sang Happy Birthday to a very old looking woman in the group. It was her 69th birthday. She was less than nine years older than me, but half the height, and looking about ninety. After the singing, and the thanks to Dario, she went into the middle of the circle, knelt down and covered her head with a scarf. She started to wail and moan, talking Mayan. Her sister comforted her at one point, and then after about ten minutes she got up and rejoined the circle. Her misery, it was explained to us, stemmed from the fact that two family members had stolen from her, had been caught, forced to return the goods, and she had decided not to prosecute. This immediate and supported way of releasing emotion, found in many other traditional societies as well as in this Mayan one, was uninhibited and profoundly moving. For us Westerners, used to holding in, and covering up, it was a valuable lesson in how cell memory takes hold, affecting our health and wellbeing, unless we find effective ways to express and let go. The photo at the top of the blog was taken with me after her emotional release: she looks better for it!

Which brings me to light. At the end of Dr Wise's seminar in England, he pulled out of the hat one more gem. He had discovered by studying publicly available MRI scans, that men and women process emotions in different parts of the brain. Emotional release can be helped in women by shining a low level laser light half way between the outside tip of the right eyebrow, and the inside top edge of the ear. For men the same effect can be promoted by placing the light on the middle of the right eyebrow. A couple of weeks later half way through a Thai Yoga massage I got out my laser and used it on my emotional release point. My massage therapist felt an immediate shift in my energy, and a release in my problem area, my tight right hip! At the end of the session she used it on herself, and felt her feet root into the floor, grounding her after our session.

So, whilst some of us would find it hard to process emotions in the Mayan way, in a group of supportive family hearing and holding us at the time of the event needing to be expressed, there are other ways that access directly where we process emotion in the brain. Of course its better to combine light with therapies such as Emotional Freedom Technique and EMDR. It was exciting in a guest house on the shores of Lake Atitlan to meet a psychotherapist from Austin, Texas, who practiced EMDR, and who had not heard of Dr Wise's discoveries with light. He looked forward to further discoveries of brain processing, and no doubt to their combination with light!
Posted by Light for Health at Sunday, January 03, 2010 No comments: