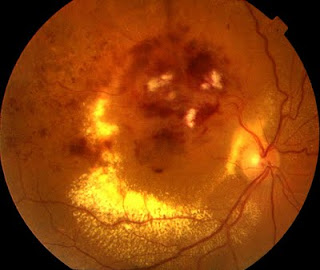 Retinal Vein Occlusion
I had an enquiry about the Q1000 today, from a patient of an osteopath who uses the Q1000. After two sessions in the osteopath's office, using the Q1000 over his eyes, his vision improved significantly. He had retinal vein thrombosis in both eyes. In addition the right eye had acute glaucoma, and a detached retina. He had silicone in that eye. His left eye for the last five years was 3/10 in severity, whereas his right eye was 10/10.
A retinal vein occlusion is a blockage of one of the veins, when blood stops flowing.When the vein blocks some blood leaks out. In addition, clear fluid leaks out causing ‘water-logging’ of the retina. This naturally damages the sight.
Click here for an explanation of Retinal Vein Occlusion
Before the LLLT treatment he would watch a TV football match, and be able to see the players but not the ball. Now, after two treatments, he can see the ball again. Before he could not distinguish different pairs of shoes, whilst selecting a pair to wear each day. Now he can see enough detail to select the pair that has a brogue design, despite the fact that these shoes have the same shape as the other shoes.
They are also beginning to notice a difference in his pupil size. After the operation his eyes were completely dilated, and now after using the Q1000 his pupils have started to contract.
An opthalmologist friend visited and he noticed that his pupils were smaller. After going home to look up all the research on LLLT and the eyes, he concluded that the light was helping the neurons to regenerate.
Overall conclusions at this early stage give rise to cautious optimism, given the greater clarity in vision after just two treatments. With permission from their consultant they are embarking on a month of Q1000 treatment at home via Light for Health's rental scheme.
Whilst listening to this story over the phone my body starting tingling! Its one thing reading the research, and another hearing the effects live on a real person. Sometimes getting this message out is painfully slow and frustrating. At other times I feel privileged to be be at the forefront of a new movement in health that is giving significant relief and healing to people who had begun to lose all hope.
Over the next month I'll be keeping you posted on further developments. It may be that this fast response is cut short, or other factors come into play to delay further improvements. Meanwhile, knowing that light cannot harm, they are going to use it more regularly at home, than they could by visiting a practitioner.
Posted by Light for Health at Friday, May 06, 2011